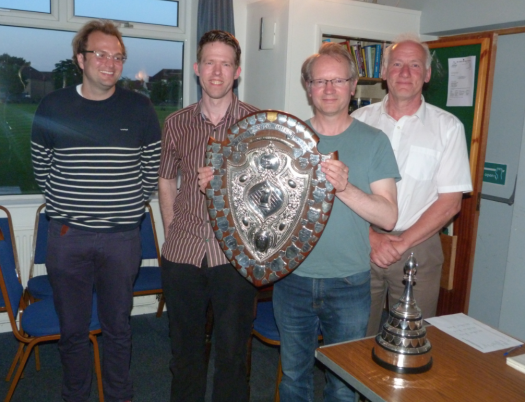 Its been a little under a week since the last club profile and today we are returning much closer to home with a post from the reigning Bristol & District League champions, Downend & Fishponds Chess Club. One of the largest and friendliest clubs in the Bristol league, Downend are an example of how to run a chess club well in recent years. Its fair to say they are the strongest club in terms of both chess ability (wining Division 1, Division 2 and Division 3 in the league) but also organisation with regular support for junior chess and last season they ran a remarkable 6 (?!) teams.  The Bristol league often runs in cycles of dominance for one club and Downed’s success is well earned in recent history.  Lets hear from Richard Livermore at the club…

Tell us a little bit about your club?

I have only been a member of Downend & Fishponds Chess Club for a little over 2 years, though my association with the club goes back to 10th November 1984 when Downend sent a team to my then club, Pentyrch, near Cardiff, for a match in a knock-out competition.

I cannot remember the result, though I suspect Downend won, but the match was played in such the most friendly manner (not always the case in chess) that a return match in Bristol was immediately arranged.

We have now played over 50 return matches, playing in Downend in the Autumn and Pentyrch in the Spring for the Mike Wood Bridge Trophy, named after the long time but recently deceased president of Downend & Fishponds Chess Club.

The home team always provides a generous buffet, and of course a most warm welcome, for the matches which are looked forward to by everyone involved.

This would not be a surprise to anyone who knows either club, as one could not meet more friendly or welcoming people in any walk of life than the members of both these clubs, and when I decided to start travelling across from South Wales each week to play in the Bristol league, it did not even enter my head to approach any club other than Downend, and their welcome to me into the club was all I hoped and expected it to be.

Can you tell us about the history of your club?

The club dates back to 1949, with far too much history for me to put in here, but this can be accessed by going to the club’s excellent, and, I mean excellent, website, www.downendchess.com.

(editors note – The Downend site contains a lovely collection of photos of the history of the club.  It looks like 1967 was a successful year just like 2017!  It must run every 50 years!)

What kind of person plays for the club?

Downend enter 6 teams in the Bristol & District Chess League catering from the strongest league players in the top division, to beginners and juniors in the lower divisions.

We have 5 juniors, certainly not beginners, playing for the teams, who are improving at a frightening rate, and receive much help and encouragement from the club’s best players.

This help and encouragement is a benchmark of our club, with the strongest players making friends with, and drinking with (yes, we do that, too) everyone, even duffers like me.

What about our B team? Well, they finished 5th in division 1, proving themselves to be stronger then all but 4 of the other clubs’ A teams.

We receive great support from members of all the teams, with players not involved in a match that evening coming along to support those playing, even in away matches, and enduring the agonies of watching their club mates and friends struggling through tight endgames under time pressure, “Why doesn’t he play Ne5 and push the g pawn….?” and other agonised whispers.

Obviously, we have strong players at the top with 4 players performing at over 200 level this season, and amongst our 190’s a 199 (unlucky).

We also have a new Hungarian player who is a FIDE Candidate Master for our A team next year.

Well, we could do do with the help!

What is your favourite thing about the club?

Our home is at Downend Cricket Club, which provides a warm welcome (that word again), and in the lighter evenings the view over the cricket pitch is lovely.

It is, incidentally, the home club of Dr. W.G. Grace, probably the greatest cricketer of the 19th century, with interesting photographs and memorabilia in the club.

If this reads a little like a “travel brochure”, then I suppose it is.

It is written out of my genuine appreciation and enjoyment of this terrific club, and I urge anyone to visit.

Well a passionate description from a proud club member that I can only concur with Richard having played at Downend & Fishponds chess club on many occasion.  I particularly like how proactive Downend tend to be on the recruitment side of things.  They are never scared of looking further afield (for example, South Wales) or building strong links with the local University to hoover up talent when strong chess players graduate.  This very tactic has contributed more than a fair share of 190 and 200 ECF rated players in recent years.

How Downend & Fishponds fair next season remains to be seen as the healthy rivalry with my own club Horfield still exists.  We haven’t forgotten losing the league two years ago by 0.5 a board point! That one still hurts…

ChessJournal is the companion app for club and tournament players. Store your games in the cloud for free and analyse them on the go on your phone or tablet. Set and track personal improvement goals, linking key games to them across the season. Leave your laptop at home the next time you visit that big tournament!

You can download ChessJournal on iOS and Android here: