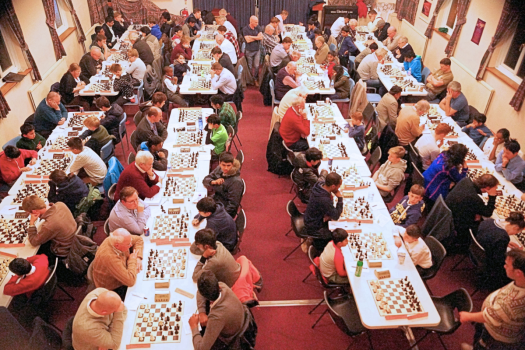 The fifth instalment today of our Club profiles features.  I have to confess to never having heard of the Coulson Chess Fellowship (CCF) when they got in touch with me so I was very surprised to learn of their size.  I’d argue the CCF falls in to the very definition of a “Mega Club” with hundreds of members!  A very unusual but welcome situation in British Chess.

This interview was conducted with Scott Freeman, the CCF Activities Coordinator and also an ECF Accredited Coach and Arbiter.

Tell us a little bit about your club

We are based in Coulsdon (Surrey) and probably have the biggest active club membership in the country. We expect to be starting the new season with approximately 120 members; roughly the same as last season, when we ran 2 teams in the Surrey leagues and 2 in the Croydon League. However unlike the vast majority of clubs, most of our members never play inter-club chess. That is their choice as we run as many teams to accommodate those who want it, but many of the members like the idea that Monday night is chess night, and that they can turn up knowing they have an arranged FIDE Rated and ECF Graded game, so they only play in the internal competitions. Parents who bring juniors like it because we have free guest wifi, so they can gete work done whilst their child(ren) play(s).

What kind of person plays for the club?

We have a huge mix of players of all ages and abilities. The oldest player last season was aged 90 whilst the youngest was just 7. Around 50% of the players are under 18, but many of them are such that they are no longer seen as juniors by those who play them – and the behaviour of our juniors is not an issue here. Nearly 10% of last season’s members are female, including 3 adults and a recent British Ladies Champion!

Can you tell us about the history of the club?

The Coulsdon & Purley Chess Club was founded in 1949 as the “Coulsdon West Chess Club” – so named as it was supported by the Coulsdon West Residents Association. The club later became the “Coulsdon & Purley Chess Club” (after it had to move to Purley) but was eventually swallowed up by CCF at the almost unanimous request of the membership, so CCF has run the show for the last decade. Although the club is now “owned” by CCF, the members are regularly communicated with to obtain a consensus when required – and there are few (if any!) issues that upset people. Members seem quite happy not to have to deal with committees and elections!

We have had a number of strong players represent us over the years; in fact one match in the late 1990’s saw us field an International Master on bottom board for a match at Guildford. Probably the most famous player to play here (albeit for a few months) was David Howell, now one of the top GM’s in this country.

Who are you fiercest rivals and why?!

It was probably Redhill in recent years, but it was always a friendly rivalry with a good rapport between the players of both teams. We don’t really have a club that we would term as big rivals.

What is your favourite thing about the club?

All of the internal competitions are FIDE Rated – and we usually have all matches completed (albeit with a very small number of default results) on time. Players have travelled many miles to play here over the years and have enjoyed the range of internal team and individual events that we run. From the standard club championship divisional structure, to the internal team event (super league) and speed chess nights (5 per year), through to the World Cup (knock-ou competitions)……and we have a replica of the football World Cup for the winner. Some players play every week, whilst others only play once a month in the Super League. Players can regulate how much they play.

Is there anything else you would like to add about your club?

We believe we have the best chess club in the country. Everything in centrally organised with fixtures arranged by the CCF office and posted online on Friday, giving everyone 3 days to prepare. Entries for the 2017-18 are currently being taken, so if anyone wants to consider playing, do not you have until the end of July to book, due to the large amount of work that is needed to prepare for the start of the season in September.

So very bold claims from the CCF at the end regarding being the “best chess club in the country” but its hard to argue with their success given their size.  They are obviously a very run well ship and the volume of FIDE rated games must be a big plus to prospective members.

I liked the attention to detail that the CCF has given to parents of juniors (free wifi).  Its not the first time I have spoken to club members who recognised that looking after the parents is almost as important as the children if your club wants to support junior chess. Its surprising how often parents become future members themselves of the club.

Our club profiles feature has been very popular recently so I am pleased with the response from the community to this idea.  If you have enjoyed this profile (or indeed any of the others) please do share it with your friends and club mates.  We are always looking for new clubs from the UK and also around the world to take part so don’t hesitate to get in touch. The ChessJournal Blog is here to support ‘over the board’ chess and the development of the ChessJournal App so the more feedback and input we get then the better it is for the wider chess community.

ChessJournal is the companion app for club and tournament players. Store your games in the cloud for free and analyse them on the go on your phone or tablet. Leave your laptop at home the next time you visit that big tournament!

You can download ChessJournal on iOS and Android here: